Here’s a photo of sister Daisy showing Emma around the backyard. There was a growl or two from Emma when she first met Daisy, but they get along now.

News Flash : Emma loves Wheat Thins! Everytime B. opens the box of Wheat Thins, Emma rushes into the kitchen. She’s still a little scared and won’t come up to B., but she stands a few feet away and longingly looks at the Wheat Thins box. She’ll eat one if B. leaves it on the floor for her or if she throws it to her.

Emma is bonding with my nieces. She lets my younger niece come up to her and pet her. The adults need to sit and wait for Emma to come to them. At night, Emma finds a bed to jump on and sleep. Wonder if my younger niece hides dog biscuits in her bed? 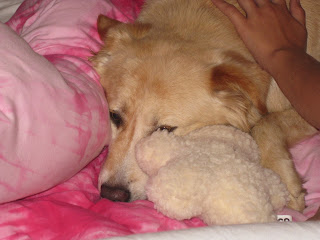 I’m happy to report that after 6 days in her new home, Emma (Goldie) sleeps on the bed with my nieces, she licks B.’s hand, and yesterday she rolled on her back and loved the attention she got when B. rubbed her belly.

Check out my friend Sara’s blog: Sara In Vermont. Every Friday, she’ll post a dog that needs rescuing. 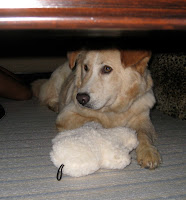 I have a story to share that’s not about teaching. It’s about dogs. Actually one dog in particular – Goldie.

Back in July, I was on Facebook reading the status updates. Mary, my friend from Lake Tahoe, Ca. posted a photo of Goldie, a dog up for adoption at the Rhea County Animal Shelter in Tennessee.
.
Goldie’s face in the photo captured my heart. I went to the site, Save a Dog and posted Goldie’s information to my Facebook page. The shelter had to euthanize dogs because they had too many. Goldie’s time was limited. She had a family that loved her, but they lost their house and had nowhere to live. They sadly left Goldie at the shelter.

“Goldie’s still here! Hurry, someone get her before it’s too late!”

I reposted Goldie to my Facebook page. This time, my sister in Southern California and my friend Paige in Lake Tahoe, both saw it.

My sister, B., and her family decided they had to have Goldie. Through phone calls and e-mails, dog lovers from California to Tennessee plotted how to get Goldie to California. My flight attendant friend, Paige, contacted B. through Facebook. (They’d never met before) and offered help in getting Goldie to California. She provided valuable information and offered to fly to Tennessee, get Goldie on a plane and fly to Orange County with her! (Paige is now on the dog-sitting list.)

The Rhea County Animal Shelter’s volunteers and veterinarian, Ashley, worked with B. and got Goldie ready. They picked up a traveling crate, made sure she had food and water for her flight, had her travel papers ready and drove three hours to the Atlanta Airport to put Goldie on a Delta flight to Orange County, CA.

The day Goldie flew to California, I was so excited I couldn’t think of anything else. I called Mary, my mom, and my sister. I texted my nieces at school. (I’m so sorry teachers!) I tracked her flight online. My sister, my brother-in-law, my two nieces and my parents met Goldie at the airport.

A scared Goldie hid under the table when she arrived at her new home, but she slowly let my nieces (ages 12 and 14) pet her. They sat very still on the sofa and quietly waited for Goldie to come to them.

Goldie has a new home and was saved from euthanasia!

Thank you Facebook, Save A Dog, my animal-loving friends, the Rhea County Animal Shelter, Delta Airlines and my sister!

Goldie’s new name is Emma. Here she is hiding under the table that first night.

Worked 4 hours in my classroom. Now I’m taking a little break before starting up again with more work I took home…there’s always something!
Tiburon, Ca

Emma, a small 4-year-old in my K/1 combo class, did one of the funniest things I’ve ever seen. I was working with a small group when I looked over at Emma’s group and saw all five kids sitting perfectly still in their desks with everything cleaned up – and I mean EVERYTHING clean: every white board was spotless, every marker was capped, every eraser was perfectly lined up. I asked what was going on and the BIG first grader said, “Emma was tired and finished and she told us to clean up”… and THEY DID. She is FOUR!!!
Anonymous