I’ve been on the mainland for a week now. LAX was the first stop and, boy, did I have a shock. I’ve been living island-style and Los Angeles rudeness was appalling. I exited the plane and headed straight for the restroom, where the woman behind me was right up on my back. Personal space means nothing here. Women pushed in line, also something that never happens in Hawaii.

The hallway floor of LAX was covered in grime, gum, dust and litter. After more rushing and pushing at baggage claim, Mark and I rushed out to the shuttle to take us to our hotel. Where were the soothing tropical tones at the LAX Sheraton? Nowhere. “So, L.A.” I remarked at check-in. The Sheraton is decorated in shades of gray, accented with black and bold geometric shapes. Trendy and hip, yes. Soothing and serene, no.

Our friend, picked us up and drove us to Barney’s Beanery in Santa Monica to watch the USC-Cal football game. Good friends and food helped our shock, but, seriously, does everyone in Santa Monica drive a BMW?

Back to the Sheraton, where I couldn’t wait for the next leg of the journey, to Georgia and the hospitable south.

Our flight to Atlanta didn’t start well. Delta charged us a huge amount of money for our baggage fees. When we had boarded, Mark and I tried to tell the flight attendant how the baggage fees were over the top at Delta. She argued with us. The passenger next to us, who travels all the time, confirmed what we were saying. She argued with him. The man in the seat across the aisle also told of his baggage experience with extra fees and the flight attendant continued to argue with all of us! We all agreed, we never fly Delta unless we have no choice, and Atlanta airport is pretty much only Delta.

Atlanta airport is huge and crazy with lots of people, but it’s clean and organized. People are aware of personal space and many offered to help me with my bag. Mark and I said our goodbyes for the rest of the week. I was staying in Georgia, while Mark was continuing on to another destination.

Off to the hotel for me at the Gateway Center, where I took a clean, efficient tram to my hotel directly off the airport terminal.

The following day was a drive to southern Georgia to watch my Godson play college football. I wanted to be full of rest and energy, so I went to bed at 9:30 PM Atlanta time. Uh, that made it 3:30 PM Hawaii time. I didn’t fall asleep for a long while. The clock on the nightstand read 3:30 AM last I saw before I finally fell asleep. 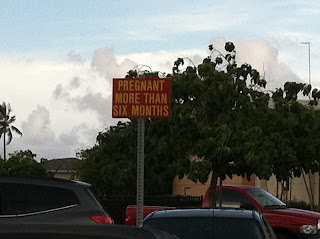 Oahu has a huge military presence. Each section of the island has some kind of military base/post/camp on it. When heading to the North Shore, we pass Schofield Barracks and Dillingham airfield. I’ve never been to Pearl Harbor for the tour. I need to do that soon. I have been on Hickam/Pearl Harbor and recently, the Marine Corps Base Hawaii.

A friend of mine is a Marine wife. I went with her to MCBH to help her with her baby and do some shopping at the Base Exchange. Not having much experience with the military, I noticed everything. With ID, we entered the base through the sentry gate. No one sped. No one was in a hurry, or they didn’t show it at least. Single family homes on nicely paved subdivisions sat to the right of us in the car. Plenty of space on the roads for the number of cars and plenty of parking in the lot. We pulled into the lot and parked. When I got out of the car, I saw this sign… pregnant women get preferred parking! Look at the sign, it’s in Marine Colors. Of course, as a Trojan, I thought of USC’s Cardinal and Gold colors. I’m pretty sure there’s no parking designated for pregnant women on USC’s campus, though.

Inside the Base Exchange I was mesmerized by everything in one building. TV’s on one side, Hallmark cards next to me, holiday decor in front of me, home items to the right and clothes for men, women and children/babies in the back. We wandered through the bath/home section. I love “one-stop” shopping and this building had it all. I could see every section from any other section. Shelves were clean and orderly. Leave it to the Marines to be organized and to make parking easier for pregnant women. Walmart on Keeaumoku Street, are you listening? 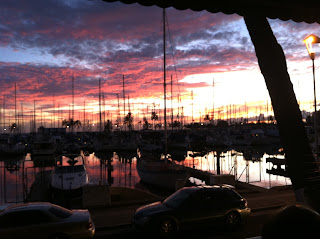 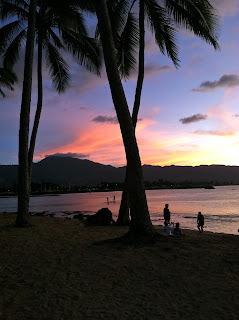 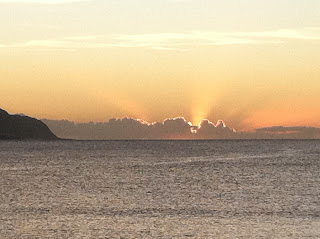 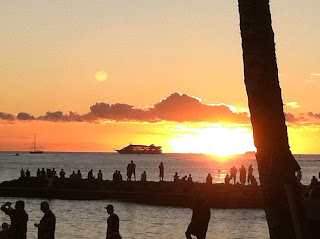 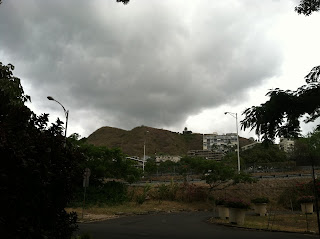 Grey skies and rain greeted me again this morning. Lest you all think Hawaii is always green and sunny with blue skies, here’s a photo looking over H-1 freeway in Honolulu.
I’ve included photos from last week, just to cheer me up. We had spectacular sunsets all week long. Let’s hope for more gorgeous weather again soon. 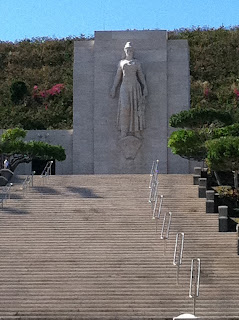 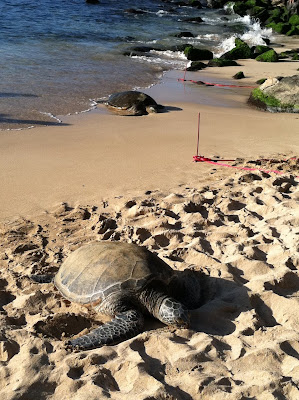 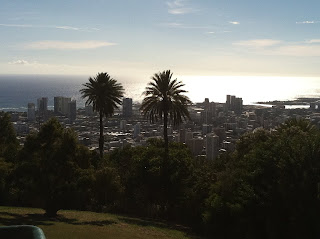 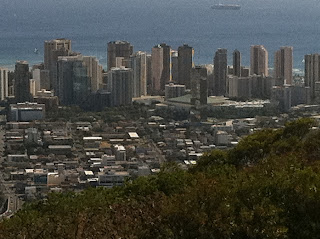 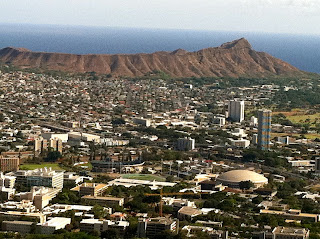 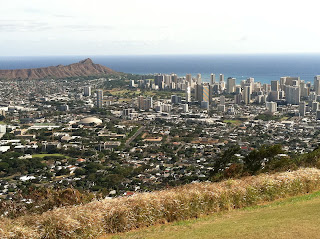 We visited Punchbowl National Cemetery on Sunday. You’ll recognize the statue of Lady Columbia from Hawaii Five-0’s opening sequence. (Both the original and the new show.) She symbolizes all the grieving mothers.

Punchbowl is located in a dormant volcano crater. It’s green and peaceful, even with the tourist bus driving around. The casualties from the attack on Pearl Harbor were the first people to be buried there, at least in modern times. I’ve been told it was a sacred place for Hawaiians in the past. I’m guessing they used it as a burial ground also. If anyone knows the story, please let me know.

It looks as if they are refurbishing/landscaping there. Wait a few weeks, then visit.

Tantalus Drive is at the entrance to Punchbowl, so we took it to where it joins up with Round Top Road. Our goal was to reach the lookout point in the park. I felt a little woozy driving up in altitude along the curvy lane. The lookout point is spectacular and worth the drive. Here are photos which show Diamond Head, University of Hawaii Manoa, Magic Island at Ala Moana and downtown office buildings.

The North Shore was our next stop, where we again saw a tourist bus. We visited our Honu (Sea Turtle) friends and learned they eat the seaweed found on this particular North Shore beach. After the Honu eat, they rest upon the sand and let the sun and water restore them.

Of course, we had to eat at some point as well. Off to Kua Aina Sandwich Shop in Haleiwa for dinner. Yum! Go there. You won’t be disappointed. 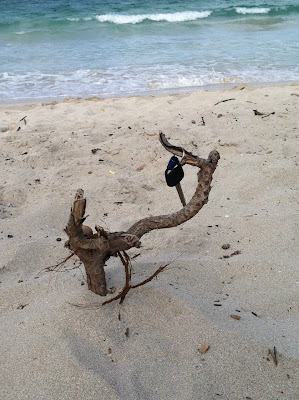 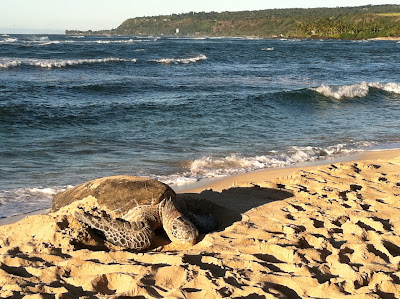 Look who we found on the beach. Isn’t he gorgeous? We sat and watched him for at least a half an hour. Hawaiian Sea Turtles are endangered, so we kept our distance. He opened and closed his eyes a few times, just to see if we were still there.

A few days later, while at another beach, we saw the branch sticking out of the sand. Someone had lost his key and the person who found it in the sand took the time to find a branch and hang the key from it. Fast forward a few days later and the key and branch were still there.

Honest and courteous people on Oahu. If you lost your car key in the sand, it may still be there.