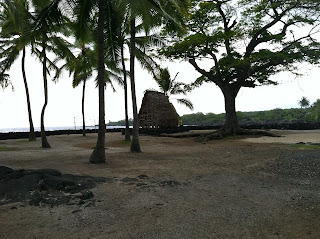 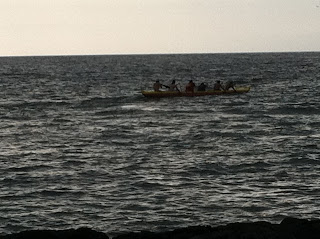 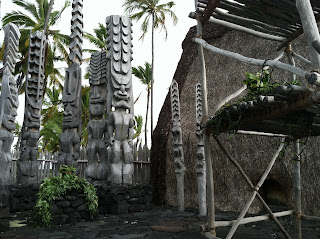 After visiting the coffee region of Kona, Mark and I drove to Puʻuhonua O Hōnaunau, also known as the City of Refuge.

A reconstructed temple called the Hale o Keawe Heiau sits on the edge of the bay. Back in the 1500-1600’s if someone broke a law (kapu) they could seek refuge here. The photo with the carved statues is the reconstructed heiau.

Next to the heiau is the former palace grounds. Reconstructed huts, games made out of stone, and fishing ponds were built for posterity to get a sense of how royalty lived back then.

As we walked out of the grounds, feeling like we could sense Ali’i from centuries ago, paddlers entered the bay. Were they seeking a sort of refuge in the water?