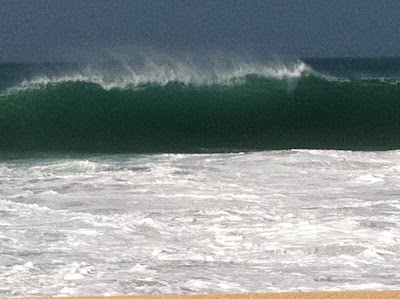 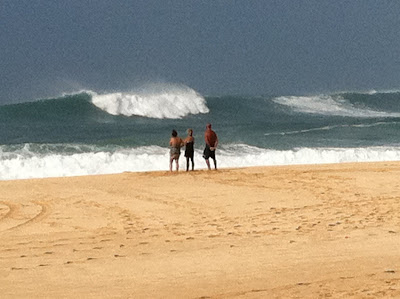 Wednesday morning we drove to North Shore to watch the waves. We stopped at every beach we could to take in the awe of Mother Nature. I don’t think we saw any 25-30′ waves, but the waves were intense. Lifeguards taped off certain beach areas and stood over the crowds to keep people off the beach. Waimea had the most surfers. Pupukea had a jet ski and a helicopter hovering over a group of surfers out in the distance. We never saw any of them take a wave. The weather was perfect. A slight breeze, sun, mid-70’s. I’d say blue sky, but there was a persistent haze of vog from the Big Island.

When we arrived on Sunset Beach, the wind had picked up. Sand was kicking up along the dry areas. Waves churned with more white wash and spray. I couldn’t help but picture three guy friends from high school. They were surfers and loved the movie Big Wednesday. They couldn’t wait for its box office release. They quoted lines from the movie on a regular basis. They surfed when they could, mostly in Newport, San Onofre and Dana Point, but they also traveled to their secret surf/camp spot in Mexico. They were a lot like the guys in the movie. Thank goodness they are all still alive and didn’t have a Vietnam war, like the movie characters.

Off in the distance I captured the last moment of a whale flipping his tail in the water. I looked out his direction and watched the explosive sprays from his blowhole shoot above the ocean along the horizon line. I may not be out there on a board floating as one with the ocean, but I sure appreciate the beauty and movement from Mother Nature’s ocean world.

Here I was on January 4th standing on the beach where most of the movie was filmed. This was my Big Wednesday. I don’t surf. Never have. But I was mesmerized by watching the waves roll in and crash on the rocks, reefs and beaches. This was the day I realized my life had changed. I live on Oahu now, not California. I left things behind, physical things, but also, a whole lifetime of memories in California. Life isn’t the same. People have passed on, friends moved away and life is all new here. It was time for me to embrace the new. I turned to Mark who said, “We are so lucky. We live here.” I agreed.